Since the release of MIUI 11, Xiaomi’s system has an earthquake warning function. According to MIUI, its warning system has alerted users to more than 35 earthquakes in China. The company was not specific about the classification of the earthquakes. Nevertheless, he indicated on his Weibo handle that most of these earthquakes were of magnitude 4.0 and above. According to Xiaomi, its earthquake alert feature is now available on nearly 9 million smartphones and TVs.

These devices are not just smartphones, even some Xiaomi TVs have this feature. A compatible device will alert the user of an impending earthquake. Today is National Disaster Prevention and Mitigation Day 2021. Thus, the company took the opportunity to announce its contributions to the fight against the effects of natural disasters.

Xiaomi further announced that the warnings have been sent to around 25 provinces in China. Unfortunately, the company does not yet have full coverage in China. So far, in its almost 18 months of existence, the MIUI Earthquake Detector has detected around 35 earthquakes. However, Xiaomi will improve the functioning of this system by cooperating with the Disaster Mitigation Research Institute. The company will also cooperate with the National Early Warning Release Center, National Emergency Broadcasting and China Earthquake Networks. These cooperations will allow warnings to be sent to more people, even non-MIUI users. 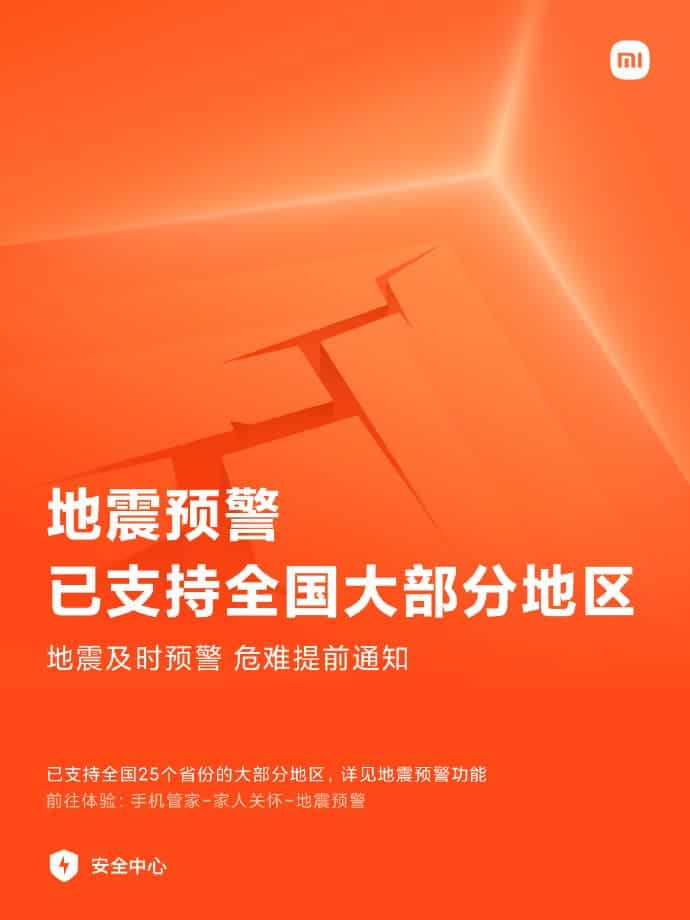 The principle of the “early” earthquake warning system is to use the time difference from the faster propagating waves to make predictions. Since these waves emanate from the depths of the surface and travel very quickly, the warning period is usually a few seconds. The faster longitudinal wave and the slower transverse wave have a relationship.

Predicting earthquakes is much more complicated than it looks. The authenticity of Xiaomi’s earthquake forecasting feature can be questioned. However, it is a good thing that he cooperates with several agencies in the country. This cooperation will likely dispel some of the warnings. However, since the feature is already active, there is always room for improvement.